Walking the Wire: Get TMI'd at Riverside! 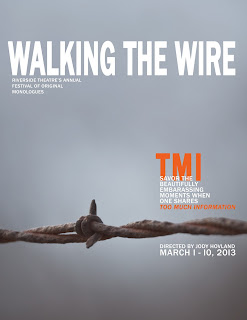 Iowa City - Any theatrical monologue is an intimate moment. A performer is up there alone, often on a bare stage with few (if any) props, relying only on his or her training and a few pages of text. Riverside's Walking the Wire takes the form a step further this year: with the theme "Too Much Information," the characters are revealing their darkest secrets, deepest dreams, or most private moments.

The show consists of eleven monologues by seven different performers. Jody Hovland directs the whole thing, tying it all together with a simple device: there are seven chairs onstage, which the actors in turn bring into the light to create their character's world. A lot is made of this one set piece: they can sit on it, stand on it, or ignore it all together. They can be at a bar, in a waiting room, or in the comfort of their own home. Each of these actors, with Hovland's guidance, is an adept storyteller, successful at invoking a variety of settings with only their voice and body.

The theme is visited in a variety of ways, both dramatic and comic. Carrie Houchins-Witt, who performs "Total Disclosure" by Maximillian Gill and "So Cliché" by Gwendolyn Rice, is very funny. "Total Disclosure" is a bit of observational humor about our need to know where our food comes from taken a bit too far. "So Cliché" tells the story of a suburban housewife who finds her college sweetheart on Facebook. It's a predictable story and she knows it, but that doesn't make it any less heartbreaking. Houchins-Witt is particularly effective in the latter piece, switching between a number of different tones with ease and grace.

In "168" by Chris Graybill and Ian Belknap, Grant Read plays a boy who explains why he must take his favorite pillow with him when his family moves: it is his best friend. This is Read's first time in Walking the Wire, but his exuberance and compassion as he plays the lonely kid with the active imagination makes me think we'll see him again.

Ottavia De Luca is also new to the monologue show. In Ron Clark's "Moon Man," she plays a cop called out at Christmas because Santa Claus is bothering people by reminding them of how beautiful the night sky is. In "Art Nouveau" by Amanda Petefish-Schrag, she plays an avid scrapbooker whose choice of memorabilia is a conversation-stopper. De Luca is an excellent comic actor, and also a good storyteller; she's very effective creating characters in both of these pieces, which are each sweet, funny, and sad for quite different reasons.

Jessica Wilson returns to Walking the Wire for the fourth year in a row. In "Doing the Math" by Arthur. M Jolly, she plays a sharp, nervous woman who finds comfort in the reliability of mathematics. As her past unfolds between the digits of her litany of statistics, we learn she has just peeked into her mother's diary and learned the story of her own birth doesn't add up. In "Sheryl's Mother Is Dead" by Claudia Barnett, Wilson plays an ostracized teenage girl: a being consumed by anger, who celebrates the death of those who have wronged her because she now finds comfort only in divine vengeance. Wilson has a very expressive face, a witty and wry voice, and a true sympathy for the damaged characters she plays. Both these scenes are insightful, engaging, and quite sad.

Tim Budd, another Walking the Wire veteran, plays two very different, very memorable characters. In "Body Work" by Chris Okiishi, he plays a very nervous man with body-image issues who tries to relax into a massage by a devastatingly handsome man. "Paul's Painted Ladies" by David H. Cohen tells the story of a janitor's love of dancing and how Rubens got him fired from his previous job at a museum. Budd is hilarious as usual, but he also has a very insightful process that gets at the essential humanity of these two quirky men. Both of these pieces are warm and delightful.

Janet Schlapkohl performs her own monologue, "Sex Ed." It tells the story of a girl whose mother, a nurse, decided to take it on herself to teach her daughters about the reproductive system -- despite the objections of their squeamish father. It's a rich story with a lot of heart, and it's a joy to watch Schlapkohl perform it. She creates a whole world of characters with a few simple gestures and voices, and you almost forget you're watching a monologue.

Megan Gogerty closes the show with her piece, "Intimacy." It may strain the bounds of taste to go into the subject matter here: suffice to say it's some pretty funny sh -- er, stuff. As Gogerty describes a crisis during the most private of moments, she has the audience laughing nonstop. It's amazing that she can tell this story with a straight face at all, let alone her perfect comic poise. It's an excellent end to the evening, and it most definitely fits the theme of "too much information."

If you want to know what Gogerty's really doing as she updates her Facebook status, you'll have to come check out Walking the Wire for yourself. Walking the Wire runs through March 10. Ticket information here.
at 10:28 AM

Email ThisBlogThis!Share to TwitterShare to FacebookShare to Pinterest
Labels: Review, Riverside, Too Much Information, Trainor, Walking the Wire