Only One More Performance of Powerful Triangle

Iowa City - The story of the Triangle Shirtwaist Factor Fire on March 25, 1911, is legendary. At the time, it was one of New York City’s greatest disasters, with 146 (some sources say 147) people dead, 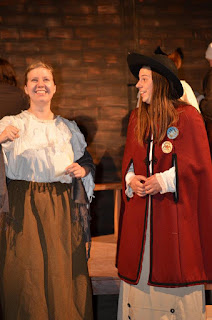 some by smoke inhalation, some by fire, and many who chose to leap to their death from the top three floors of the building. Most of those who died in the fire were recent immigrants, predominantly Jewish and Irish women, many in their twenties, some as young as 14.

How do you stage a disaster like this on a small stage with limited resources? You get Janet Schlapkohl to write it, that’s how, and Jason Grubbe to direct it. With a small cast, key characters doubling in contrasting roles, and an exceptional commitment to telling a story, the play makes us think as well as feel.

Sound confusing? Well, it isn’t because the writing and direction, not to mention the acting, keep it all straight for us. The characterizations are extremely well drawn and executed. Safe in the audience, we all knew what was happening and whom we were watching. We see the gradual awakening to exploitation and the inchoate union movement. We even see striking workers, gulled by promises the employers had no intention of fulfilling.

The real tragedy of the play is that the fire need not have claimed all these lives. Exit doors were locked, some doors opened inward so the crush of desperate workers prevented anyone from escaping, the fire escape could not bear the weight of multiple bodies, pulling away from the building and sending the workers precipitately to their death.

This is a grim topic for a play but the magic of theatre prevents us from leaving the performance defeated and depressed. I don’t want to reveal the wonderful ending of the play, our last glimpse of the six factory girls we have come to know, but I will tell you it is powerfully effective and will stay with you.

The play will be presented again tonight (Saturday) at 7:00 p.m. by Combined Efforts Theatre. See it if you can; it is a remarkable accomplishment.

Directions: Take Highway 1 in Southwest Iowa City toward Kalona. Turn left(South) on Maier Avenue (gravel). It takes an S curve and winds past a subdivision(on the left). The first intersection is Osage. Turn right(West). It will be on the right, the only property on the road.
at 9:33 AM