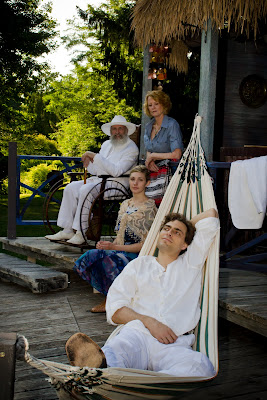 Cedar Rapids - The Reverend T. Lawrence Shannon is having a bad day. To say the least. He's got a crippling fever, the battleaxe who's hired him as a tour guide for the Baptist Female College of Blowing Rock, Texas is pursuing statutory rape charges against him on behalf of a young Texas songbird, and to top it all off, the old friend he's come to see in Mexico has died, leaving his saucy, oversexed widow in charge of the Costa Verde Hotel. He could really use a drink, but what's he's going to have first is a nervous breakdown.

This is the striking setup of Tennessee Williams' memorable drama The Night of the Iguana, directed by Jason Alberty for Classics at Brucemore. The production is a whirlwind of wild action, at times comic and at times intensely dramatic, with some quiet moments reflecting on some very powerful themes playing counterpoint. The show plays at Brucemore's natural amphitheater, and, appropriate to the setting, features a live mariachi band (Mariachi De Colores) as the pre-show warmup.

Shannon (Jim Kropa) is a nervous wreck when he arrives at the hotel, but Maxine (Marty Norton) welcomes him with open arms. She's seen him in this condition before, and she's unperturbed—even amused—by the trouble he's brought to her doorstep. Shannon is soon chased up the hill by the austere Miss Judith Fellowes (Megan Ginsberg), who demands the key to the tour bus, and the saccharine Miss Charlotte Goodall (Olivia Frisch), who insists he has the key to her heart. All this action falls hard upon itself, scarcely taking a moment to catch its breath beforre the stoic, resourceful Hannah Jelkes (Katy Slaven) steps on the scene. She is a traveling painter accompanied by her grandfather (Len Struttmann), "the world's oldest living and practicing poet." Shannon takes an immediate liking to Hannah, Maxine an immediate distrust.

Soon everything has fallen apart: Shannon has lost his job and flies into an explosive rage. He's left alone with Maxine and Hannah, who each deal with him in their own way. Maxine ties him up and leaves him in a hammock, while Hannah makes him a cup of poppyseed tea. It's an interesting look at different approaches to dealing with the dangerously mentally ill. Williams had a deep insight into human nature, and delivered those insights in very creative ways. It's always great to see actors bring the human element of his works to life, and the principals here do it well. Kropa's Shannon is thunderous, taking over the stage with restless passion. His technical skill is evident; his accent work is believable and he has the energy to sustain Shannon's repeated temper tantrums. His interpretation seems like it could be a bit more nuanced; he is a vocal freight train, barreling through some of the more entertaining bits of phrasing. It's a clear choice, however, and it fits the character well. There's also some lovely contrast when we see how he reacts to Hannah; from his first interactions with her he seems more calm, more centered. Slaven and Kropa counteract each other quite well, his jagged outbursts balanced by her collected, articulate observations.

Marty Norton is charming as the tough and sexy Maxine Faulk. She's comfortable in the skin of this character and sets up the environment very well in the way she interacts with the servants and guests. She really gets inside the head of Maxine, and shows us both her tough exterior and her vulnerable core. The common thread between these people is that they are all survivors, left to carry on in a world that has moved on without them, and no one embodies that idea better than Norton. She is well-paired with both Kropa and Slaven, and the struggle over Shannon is both intensely dramatic and comically absurd at times.

Slaven's delicately balanced portrayal of Hannah is what reminds us we are in a Tennessee Williams play. She is able to operate on "the realistic level and the fantastic level," as Shannon puts it; she shows us the human fragility in these improbable situations and is very natural and honest with the language, while still savoring it and showcasing Williams' linguistic mastery. She is playing a bit above her age as Hannah, but she has the grace and poise to pull it off. Her understated observations are played with just the right amount of detachment; this character could easily come off as aloof, but it is clear from the way she interacts with Kropa and Struttmann that Hannah has boundless compassion. What is most successful is the subtlety in Slaven's acting technique; her tense face and measured deep breath when Hannah first encounters Shannon's explosive rage tells us much more about the character than an entire paragraph of Williams' lovely monologues. This is a tricky character to play, and it seems Slaven has struck just the right balance between honesty and artifice.

Others characters are painted with a broader brush. Megan Ginsberg is over the top as Miss Fellowes, clearly a deliberate choice intensified by her short, jabbing gestures and overall clenched posture. Olivia Frisch as Charlotte Goodall and Andrew Clancey as Hank also seem less naturalistic; this seems to be a deliberate directorial choice to reinforce Shannon's characterization of the situation as "fantastic." Scott Humeston's Jake Latta is a lot of fun; his character work and hostile attitude towards Kropa's Shannon really up the stakes. The Mexican servants (Richie Akers and Kivan Kirk) and the visiting Germans (Skyler Matthias, Nathan Nelson, Heather Akers and Hannah Spina) are more realistic background characters, but still quirky and interesting. Struttmann is excellent; his Nonno is soft and kind, overbearing but never annoying, and his rendition of the poem at the end is quite moving.

Jason Alberty's direction brings out the themes well and realizes the potential of this wonderful script. As said, there isn't a lot of unity in the acting style, but this fits the tone of the play; Shannon's world, after all; is jagged and "fantastic." The interesting characters from Williams' script are explored thoroughly, and the atmosphere is very appropriate. There are quite a few memorable images from this production. Three that stand out: the picturesque view of the "rainforest," creating by the actors reactions as they look out over the audience; Hannah calmly painting Shannon as he pacing around the stage, ranting and raving about the hypocrisy of the church; Shannon violently cutting the coconut as he finally breaks and decides to have a drink. This is a hot, sweaty, drastic world and this company fills it with vigor.

The set, by Derek Easton, makes good use of the natural space, allowing for great sightlines everywhere. There are plenty of levels to play on, and the detail on the patched roof of the place speaks to the run-down feel of the hotel. It allows for some great staging moments, especially when interacting with the lights (by Kevin Wake); at one point, we can just barely see Hannah's silhouette through the curtain to her room as she watches the action unfold.

The Night of the Iguana is a great choice for an outdoor show, and the atmosphere, as mentioned, was rendered quite well. The only thing that casts a shadow over the experience is the practice of using microphones. While arguably necessary in a musical, in a straight play it puts an artificial barrier between the audience and the actors, and the sharply realistic tone the play can take on is muted as people seem to be shouting intensely intimate conversations. Trained actors should be able to project in a space like this, and on opening night, the occasional popping and scratching was extremely distracting. Either the levels were adjusted quickly, however, or the effect just faded into the background, because it was less bothersome as the night went on. It's a testament to the actors that they were able to make the emotion read effectively despite this distortion to their voices, and the overall production is very effective.

Email ThisBlogThis!Share to TwitterShare to FacebookShare to Pinterest
Labels: Classics at Brucemore, Review, The Night of the Iguana, Trainor