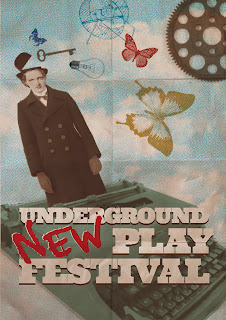 TCR - Theatre Cedar Rapids’ Artistic Director Leslie Charipar began her curtain speech by noting that the Underground New Play Festival is one of her favorite events each year. And what’s not to like? Local playwrights get the chance to see their newest work on stage for the first time. Theatre goers feel the excitement that’s always part of the unveiling of brand new shows. It’s an excitement that one doesn’t feel before the curtain rises on… Hello, Dolly! for instance. (Please, no one bring back Hello, Dolly!) So I have to say I concur with Ms. Charipar – the New Play Festival is one my favorite events of the year, too. And this year begins on a decidedly funny footing, with four shows that left the audiences chuckling, laughing and sometimes guffawing.

The first show, Of All Things Atypical, was a throwback to the Oscar Wildean comedies of manners. Playwright Damon Sindelar sets the scene well as we watch a mother (Lisa Wipperling) prepare her daughter, Sicily (Emmy Lane Palmersheim), for the arrival of her first suitor (Nicholas Walters). The costumes are wonderful, creating the atmosphere of an Oscar Wilde era play. Each of the actors plays their character to perfection, including the pert maid (Donna Heyvaert) who is quietly filching cookies throughout the show. I especially appreciated the physical humor director Krista Neuman and cast added to the show. From a cookie flying into a teacup to Walters’ fumbling with his ascot, all of these moments worked very well.

The second show of the evening was the funniest and also had the most depth, which I suppose is appropriate since it is about, well, a hole. In Brian Tanner’s The Hole Story, two blue collar army guys stand on some planet (or was it the moon?) holding rayguns protecting a hole. Not the crater, mind you, but the hole which is inside the crater. Earth has been attacked by the Martians and the war is happening out there somewhere while these two guys follow orders, protecting the hole from, well, no one. My description is not coming close to doing justice to the humor of the piece, which is wacky, yet thoughtful, and both funny and perverse. Both actors, Duane Larson as the doing-my-duty soldier who is slowly losing it, and Andrew Clancey, as the continually questioning new recruit, play the humor well. Larson masters the comedic timing and Clancey use his physicality to ramp up the comedy. Director Meg Dobbs made some good staging choices, particularly the end when Larson says goodbye to the hole.

The third show, Leggo My Egg-O-Mat, was written by Larson. Grandpa (Rick Titus), a befuddled old man who thinks his granddaughter Timmy is his grandson, is searching for the Egg-O-Mat. (What is the Egg-O-Mat, you ask? See the play or if you’re impatient, Google it.) The play is really odd in a lot of ways, not the least of which is the fact that Timmy (Lily “Pickle” Palmersheim) keeps running offstage only to reappear injured in some way. But neither bee stings nor rabid dog bites get her down as she returns each time chipper and impatient with her confused grandpa. The audience laughed a lot during this play, finding humor in both the interactions of Timmy and Grandpa as well as the arrival of Phil (Nicholas Walters), an energy company worker with a thick New Jersey accent who Grandpa believes has been sent to provide guidance. The absurdity of the play is well directed by Zhen E. Rammelsberg, who clearly directed her actors to just go with every twist and turn and have fun with it.

The final show of the evening, The Time When Presley and Mrs. Luther Took a Stand in the Alley, Kinda Sorta, was written by Mike Wilhelm. Ten year old Presley (Max Locher) finds comfort in conversations with a homeless woman, Mrs. Luther (Meg Norris), as he is dealing with the loss of his mother, the cruelty of his older sister, the sad prospect of a school closing, and a threatening father figure (though we’re never quite sure what is going on with the father, one of the frustrating parts of the show.) This play is the least polished of the four shows. In fact, during the talkback, it was noted by the artists that the show doesn’t have much of plot and is more of a day in the life sort of play. That can be effective, but when serious issues are brought up in the context of a story, we want something to happen. There are some good moments in the play (the 80s advertising references were fun, for instance), and I enjoyed the humor that is woven throughout the show, but in the end we are left feeling nothing is resolved and no character has moved forward in any way. To be honest, I am still not sure what the stand is that Presley and Mrs. Luther made. Still, kudos to a strong cast, particularly young Locher as Presley, who created an honest and real character, and Meg Norris, whose bag lady is definitely intriguing.

A side story of the show involves Presley’s sister, Jasmine, played by Emmy Lane Palmersheim who also played Sicily in the first play. Like Sicily, Jasmine is also trying to find a suitor, but instead of using tea and cookies, Jasmine resorts to less legal substances to woo a boy. On the drive home, I was melding parts of the two plays in my head, creating an interesting contrast between these two girls both searching for love. And that's one of the fun parts of experiences like this... you never know where a new play may take your own imagination.

Before I end this review, I have to ask TCR... Where do you find all these talented kids? Both Palmersheim girls know how to command a stage and Locher has an instinctive understanding of the rhythms of speech. It’s great to see kids getting the chance to act alongside adults instead of in a children’s theatre setting.

I strongly recommend you check out these four plays which are only showing tonight. You’ll have a lot of fun, laugh quite a bit and maybe you’ll even be creating new plays on the way home. Then check out the rest of the Underground New Play Festival as it continues this weekend and next.
at 12:59 PM