ISO Is Charmingly Out of This World 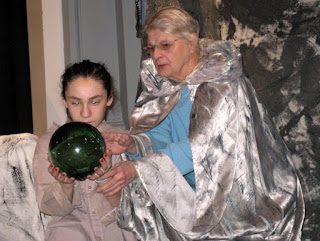 Iowa City - ISO is a spaceship orbiting Earth from the galaxy Tennaj55. Their mission is to comb the universe looking for the DNA code for peace; it's the Commander's belief that somewhere out there, there is intelligent life that has moved beyond violence and aggression. Of course, with hardly any power left and a pair of sarcastic robots who can't help but point out that the planet seems to have wiped itself out in a nuclear war, there's not a lot for her to hope for.

So goes Combined Efforts' post-apocalyptic comedy ISO - Orbiting from Galaxy Tenaj55, written and directed by Janet Schlapkohl. The show is an entertaining tale about the quest to find something worth saving in a universe that has been torn apart by war. The show runs again tonight (December 8) at City High's Little Theatre at 7:00. Not only is it quite funny, but it asks some thought-provoking questions and has some very moving moments.

ISO opens on a futuristic spaceship; the set is a creative collection of found objects arranged to look like sophisticated consoles for mysterious machines. It sets just the right tone for a fun space voyage. We meet the Commander (Isabel Cody), whose mission is to find "the genetic code for peace." An energetic leader who pushes forward with bull-headed determination, she knows that the universe is big enough to contain anything, even intelligent life that is peaceful. Cody, full of physical energy and snappy dialogue, is delightful as this character.

The robots on board the ship, XC#13 (Avery Mossman) and XC#14 (Jacob Walterhouse) are a little more skeptical. They're convinced that only machines are perfect and that anything that contains DNA is inherently prone to violence. As they descend toward the "third planet from the star," clouded in a recent nuclear winter, they constantly nay-say and poke holes in the captain's philosophy. Mossman and Walterhouse are hilarious as these robots; their awkward movements and voice patterns are quite funny, they play off each other well, and some of the best moments are their clashes with their frustrated commander. 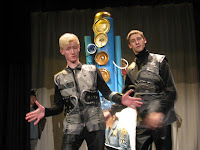 The whole ensemble is really solid in this first part; it's an entertaining introduction that moves right along. Schlapkohl's direction is very effective, as is her writing: the exposition is clear and quick, the jokes and gags are quite clever, and the character types, though they come from an alien culture, are easily recognizable.

The other setting—the scorched Earth that this spaceship is orbiting—takes a different tone. It's a little slower, a little more dire, and very sweet. Hux (Emi Bergman-Corbet) and Ren (Jordan Lafauce) are charged with caring for Vin (Phoebe Chapnik-Sorokin) and passing down the knowledge that allowed them to survive this wasteland. We learn two facts, one tragic and one inspiring, from these three: that Ren and Hux are the elders of their people, because nobody lives past twenty, and that the methods of survival and safety as well as their culture's morality are passed down as "code." Much of this code contains the best of humanity—kindness, respect, and protecting those who are in need—but some of it results in fear and isolation. The young Vim, who isn't afraid to buck the "code" to do what's right, and who still believes in the psuedo-mythical Eve Firefox (Evie Stanske), who's older than twenty and remembers the past, seems to take a longer view.

These young actors are wonderful. They play close attention to the intention behind what they're saying, and they do it with energy, humor, and warmth. Lafauce is quite funny, Bergman-Corbet is sweet and protecting, and Chapnik-Sorokin is outstanding. As she sets off on her adventure, her charm and optimism are infectious. 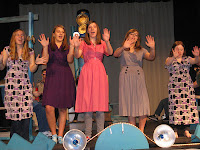 What she finds is knowledge of the past—or what remains of it—in a small green globe that transmits holograms. This is how she communicates with the spaceship, sharing knowledge of Earth's history, in the form of an old variety show. This is a great device for Combined Efforts because it allows songs and skits into the show without breaking the narrative. The a capella songs are very intimate, and very sincere, and there are some very funny moments in the ensemble pieces. At the same time, Schlapkohl's selections hit at the bigger themes of the show.

Is humanity worth saving? What would a floating spaceship in the future think of our collective culture? Would we look bad, as Hux fears, or would we be redeemed? From the perspective of the XC units, it seems like a long litany of wars and violence, from Bonnie and Clyde to the succession wars of medieval England to World War I and beyond... and is a species worthwhile if it doesn't value itself enough to avoid its own destruction?

But then we have Louis Armstrong's "What a Wonderful World," sung beautifully by Cornel Stringer, and one wonders how someone can describe such beauty so soon after the massive, pointless destruction of World War II. One couplet from the song strikes at the heart of Iso's optimism:

The possibility of learning and growing is highlighted, as Vim, Ren, and Hux learn from the mistakes of their elders and as ISO's Commander restlessly sweeps the galaxy looking for morally perfect lifeforms. We're far from there yet, but there is hope, and the selfless acts of the main characters are very moving.

These themes fit right in with Combined Efforts' mission, which is to be "a purposefully inclusive theatre company for artists with and without disabilities." Everyone on stage performs at their best, and there is a real sense of community, and people working together to create something bigger than themselves. This is a warm, funny, and thoughtful show, and I encourage you to take the opportunity to see it tonight.
at 9:09 AM