A review of Richard III

Riverside - It was the afternoon of an outdoor venue’s discontent (thunderstorm warnings and torrential downpour) made glorious summer theatre with clear, starry skies and rain-cooled evening air. 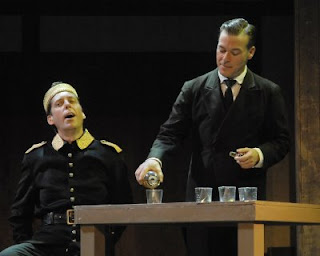 offering — Richard III — on Friday, June 19th. Severe weather earlier in the day likely contributed to a slightly smaller crowd than expected, but audience size did not affect the accomplished work of a cast of actors with performances ranging from “quite capable” to “outstanding.”

The play’s events occur during the War of the Roses—England’s civil war between the York and Lancaster dynasties—just after the defeat of Henry VI, the last Lancaster. Edward IV (“this son of York”) has assumed the throne, but ill health numbers his days. Next in queue to the throne is his brother, Clarence, but his other brother—Richard, the Duke of Gloucester—plans his own ascension to the seat. Anyone who stands between Richard and the throne—including his own brother—will be summarily, cunningly and heartlessly removed from the path.

Richard—portrayed by New York City actor, Dennis Fox—dispels with any mysteries about what he plans to do, and why, in the famous “winter of our discontent” extended confessional/statement of purpose. Crippled with a useless arm and a leg requiring a rigid brace, Richard believes he is too deformed to find love and, therefore, resolves himself to the ruthless pursuit of power to fill the void.
Lest the audience feel pity for Richard, however, Fox’s straightforward, engaged but unimpassioned manner in his opening speech belies vulnerability. He speaks coolly of his disfigurement and its effect on his soul and hides his woundedness behind tactic, just as he conceals his twisted arm hidden behind his back at almost all times.

And when kneeling is required—an oft-administered maneuver of persuasion—he removes a pin from his leg brace, allowing his knee to bend. The action is unapologetic and yet, on some level, Richard seems aware that the extra effort does inspire a modicum of sympathy.

Counter to what is said of Richard or what he seems to think of himself, Fox is not made to seem ugly, sickly, old or in ill health, aside from obvious physical limitations. He is healthy, strong and, for what it’s worth, handsome. He woos the recently-widowed Anne with flattery and skewed emotional logic, even with her husband’s bloodied corpse in sight, and Anne succumbs to Richard.

Conspiring next to Buckingham and the others in his camp of supporters, Richard joyously pursues his aims, leading to several very humorous situations that maintain the audience’s support for the first half of the play.

With the exception of three minor and well-handled opening night line stumbles, Fox’s entire performance is completely in command of itself, not a moment of the text’s logic missed, overrun or taken for granted. As Richard nears his goal and fears for security of its attainment, Fox steps into the anxiety and frustration, as well as sheer terror and remorse at the bombastic momentary return of an exiled conscience during a dream sequence.

In a play of this length (Shakespeare’s second-longest after Hamlet) it is very important that Richard is really good or little else matters. Riverside’s production succeeds in its casting of Dennis Fox. But Fox is not the only one doing great work. The entire cast—even the acting interns—are very competent with a number of standouts.

Tim Budd, as Lord Buckingham, has magnetic stage presence and, as collaborator and fellow conspirer, creates an exciting, charged chemistry with Richard. Later, when Buckingham is betrayed by Richard, Budd makes Buckingham’s remorse for having supported Richard palatable and believable.

Ron Clark, as the dying King Edward IV, provides some of the play’s much-needed penitence and believable sorrow necessary to depict the true destruction Richard has produced. Edward’s attempts to bring peace to his warring house and his lamentations over the death of his brother Clarence inspire compassion and sympathy. Clark also plays the mayor, duped by Richard and Buckingham in one of the play’s comical moments, and leads the audience to complicity in crying out “Long live our sovereign, Richard King of England.”

Other solid performances include Jody Hovland, as Richard’s mother, the Duchess of York, Steve Cardamone as Clarence, Patrick DuLaney as Hastings, Michael Perez as Catesby, Jordan Laroya as both a murderer and as the assassin Tyrell, and several others.

Saren Nofs-Snyder, who plays Queen Margaret, possesses a professional-grade, seasoned instrument and is regal and intimidating. Though borderline melodramatic at times, she assumes a mystical quality as prophetess of Richard’s destruction and is effectively added to several scenes where Margaret’s predictions return to haunt those who failed to heed them.

The other primary female roles, Anne and Elizabeth, are played by two quite capable actresses. In their collective performances, however, lies one shared problem. It is one of the few criticisms I have with the show, but it’s an important one. Each actress, in her own way, glosses over the devastating loss and maddening pain that her character has endured.

As Anne, Mallory Portnoy has a fairly clear understanding of what Anne is supposed to be going through, but her performance is more of a “shape of experience” than a real, rooted, nuanced experience of loss and grief. Moments of “put-upon” emotion and a forced vocal shakiness give the performance an air of falsehood. Granted, Anne has one of the most difficult scenes of all Shakespearean female roles. Transitioning from very fresh, very deep loss and shock to reluctant seduction by the man who caused her such pain is a little hard to make emotional sense of. Portnoy is a fine actress—and does succeed in telling the story—but she could take the performance to a new level by deepening her experience as an actress.

As Elizabeth, Dawn Michelle Mancarella is quite sturdy and commanding, but, when she discovers her babes are murdered, the actress barely approaches the depth of shock and loss a mother would feel. In fact, when Richard turns up right away to woo Elizabeth to relinquish her daughter in marriage, Mancarella is quick to jump into a tennis match of dialogue with Richard, completely stepping over the profound emotional realization of what’s just been taken from her forever.

Again, these are good actresses playing emotionally difficult roles. The challenges are no small feats. If their portrayals afforded more vulnerability and risk, it would be of tremendous service to the play as a whole.

Seemingly set in the World War I era, the play opens with energetic, period music and the presentation of the cast in costumes and mild mannerisms of the day. The signifiers of the time period are subtle and work well, including a telephone and other modern set pieces, frequent cigarette smoking, modern weaponry, and sound cues of aircraft, bombs and machine gun fire.

The set’s simplicity serves the play well. In fact, there isn’t much “set” to speak of. The beautiful flood-survivor-of-a-venue provides a foundation of stairs, balconies, levels, and uses the seating aisles to create depth of staging. The music, judiciously used, is dreamy with an undercurrent pulse that helps drive transitions and weightier moments. The lighting effectively directs mood, tone and focus and, coupled with accompanying visual effects, gives a mystical quality to a surprisingly frightening dream sequence.

Richard III runs through July 12, along with A Midsummer Night’s Dream. It is an impressive night of professional theatre in a beautiful and unique setting.

Angie Toomsen has an MA in journalism from the University of Iowa and a BA in theatre from UNI. She spent nearly a decade in New York City, seeing, participating in and studying theatre. She still enjoys writing, acting and directing as time permits.
at 1:26 PM

are you kidding me? this is an amazing show . . . i have seen it twice now . . . .when have you taken on something as challenging as RIII and lived to tell about it? get over yourself and stop looking to criticize anything - anything so you can feel like you have some credentials to go after actors as talented as ms. portnoy and ms. mancarella. to hold them up to any criticism is beyond the pale - they are far better performers than you see at ICCT or CC. get over it.

Hmmm. I have read both Ms. Toomsen's review and Anonymous's comment several times and still am not sure where "Anonymous" get's off by criticizing the reviewer.

I would agree, however, that Ms. Portnoy's and Ms. Mancarella's lacked the same fervor as that of Dennis Fox's Richard III. They simply did not 'come off' as compelling characters.

I ran into Dennis Fox on my way to work during the early morning of the show's last weekend run. "That was an awesome show.", was all I could say before I had to get into my car...and I'll certainly stand by that statement. Two thumbs WAY up.