Summerland is riveting and thought provoking

Cedar Rapids - Saturday afternoon I experienced two very good shows at the TCR Underground Festival. The first, The End of the Affair, was a simple and funny show 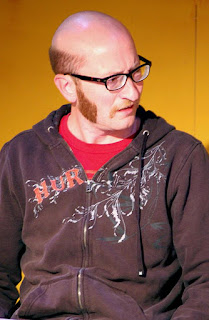 about two co-workers who negotiate having an affair.

The play starts just as Hank (Chad Sundermeyer) rejects a kiss by Shelly (Emily Nelson). We learn quickly that both are married. The dialogue is witty and well delivered by both Nelson and Sundermeyer. The staging was well done by director Jay Burken. Though I was sitting in the main section, it seemed to me that the audience sitting on the sides were able to enter into the story as well.

The End of the Affair was like many of the shows I've seen at the festival. A decent show, well executed. However yesterday afternoon, I saw a show that went way beyond what one would expect from a new play by a playwright who hadn't written a play since he was in college fourteen years ago. Rob Merritt's The Summerland Project is a play that needs a bigger stage, one beyond the borders of Iowa.

Set in the future, The Summerland Project tells the story of Carter (Matthew James) and Amelia (Katy Slaven), two newlyweds 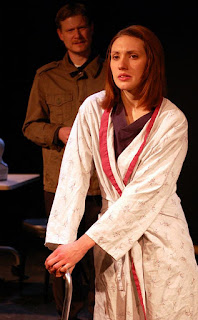 whose lives are changed forever when an aneurysm causes Amelia to suffer locked in syndrome, a condition in which a patient is aware and awake but cannot move or communicate due to complete paralysis. There is no hope for Amelia, and only anguish for Carter, who suffers a vigil at her bedside for two years. Enter Paul Wesley (Nathan Nelson), the president of a corporation whose science division has created a way to copy a person's brain and put it into a simulated body, which is so lifelike one cannot tell that it is synthetic just by sight. Carter is uncertain, but in desperation goes along with the plan.

What follows is a story that is fascinating, riveting and thought-provoking. Who are we? What makes us human? Our memories? Our emotions? Our bodies? Some combination of all three? The genius of Merritt's play is that he offers no definitive answers, allowing the audience to leave the theatre asking these questions.

Merritt's script is well executed by the cast. James turns in a particularly heart breaking performance. He moves from desperate to haunted to resolved, perfectly 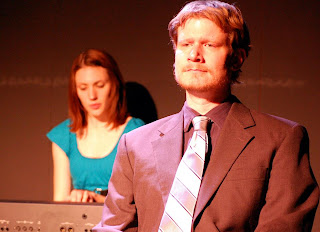 depicting the character's arc at every moment. Slaven is also excellent. She captures the android character wonderfully in the early scenes and gives an absolutely devastating performance when she pleads with Carter to believe in her love for him.

One of the scientists, Dr. Ellen Beckett (why does she get a last name, Rob, when poor Max is just Max?), is played by Joy Mincy Powell, a commanding presence on stage. Ellen is also dealing with her own demons, and Powell ably shows us that her pursuit of the perfect android is a way to wrestle with those demons.

Another secondary character was Adah (Clare Duffy), a reporter who moves the action forward and gives us the exposition we need to know. Duffy, a local radio personality, does a fine job in this role. Philip Schramp portrays Senator Williams, a character I expected to despise, as he initially comes across as a right wing religious nut. However, Schramp does such an excellent job of selling his point of view that I found myself understanding, if not agreeing with, his perspective.

A play with this sort of gravitas needs humor as well, and the character of Max 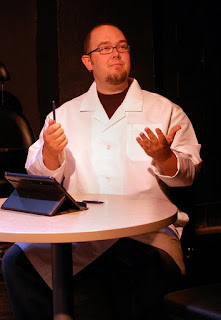 (Isaac Helgens), the other scientist, brings it. Helgens knows how to deliver a witty line. However, Merritt doesn't allow the character to become a punchline. Instead, he allows Max's depth to show through at the end of play, extending the questions the audience is wrestling with. Helgens handles this more serious scene well.

A day later, I am still considering the questions Summerland raises. What choice would I have made if I were in Carter's place? Should we be allowed to cheat death? Are the memories what makes us who we are? This play sticks with you. It was a powerful show, well executed by talented actors. Let's hope Merritt can find another venue for this play so more people have a chance to experience it.

Finally, I have to say congratulations to Theatre Cedar Rapids for a successful new play festival. I was never disappointed and enjoyed every show on some level. I sincerely hope this is an annual event for many years to come.
at 10:36 PM