Cedar Rapids - The TCR Underground Festival comes to a close today with the full length Escape from the Underground by Erica Jo Hoye and 10 minute Symmetry by Mike Wilhelm. Both are strong shows and an excellent way to end this festival. 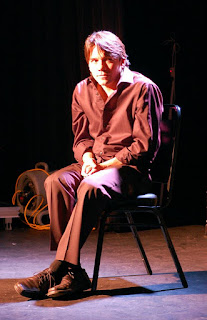 Symmetry is simple and wonderfully affecting. Wilhelm's script chronicles the relationship of a mother (Donna Heyvaert) and son (Christopher Cole), from pregnancy to the mother's death. The staging couldn't be more simple. Mother and son sit on chairs on opposite sides of the stage. What follows are many short scenes that take us through the lives of these two characters. There are no plot surprises, but commitment to character carries us through this touching story.

Heyvaert is wonderful as the mother, who has a tradition that she shares with her son of wishing on a penny every year. This clever device takes us from the 50s to modern day. Heyvaert clearly shows us every facet of being a parent - fear, pride, frustration and above all, the love that permeates every moment. Cole easily navigates all ages of the son, from baby to toddler to teen. As the adult son, he takes us into the helplessness of a child who witnesses his parent regress into a child-like state. It is a moving performance.

TCR, this show deserves a revival on Mother's Day. Bring it back for a one day only event. It's sweet and simple and true. I was not the only one wiping a tear away at the end.

The second show of the evening, Escape from the Underworld, was full of twists and turns, creating an engaging story filled with clever wit. Jocelyn (Bailey Steinke) died in a drunk driving related car wreck at age 17 and was sent to the Underworld where she meets Persephone (Ottavia De Luca), who rules there with her never seen husband Hades. (Apparently, there is no 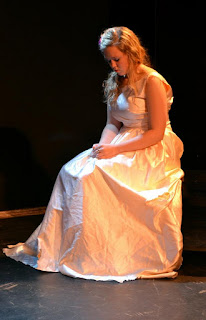 Heaven and Hell - Greek mythology turns out to be the truth.) Seven or so years later, Jocelyn's sister Abby (April Kamp-Whittake) dies and arrives in the Underworld. Jocelyn is not thrilled to see her as her sister has married the boy she loved. What follows is a complicated story regarding the rules of the Underworld and how one may escape.

The actors are all excellent, particularly De Luca as the majestic Persephone and Steinke as the perpetual teenager Jocelyn. De Luca strides across the stage, every movement evoking a queen. Her voice transforms from charming to commanding in an instant. Steinke presents a teenage smirk and attitude consistently and in this she is assisted by a clever script filled with witty barbs, which she delivers like swift arrows from the bow of Apollo.

If there is any criticism to be leveled at this show, it's perhaps that the story is a little too complicated, filled with underdeveloped motivations by the principal characters. Lee (Alex Williams), for instance, is a dead teenager from the 70s who has been waiting for Jocelyn's sister to arrive so he can set the plot in motion. His reason for doing this is clear, until it isn't when there's a suggestion of a second reason that is never developed and almost feels a little tacked on to add a little romance to a script that doesn't need it. One is also not quite sure why Persephone is so against the escape or whether or not Abby wants to help with the escape or not. Some clarity behind character motivation would make this a stronger script.

Still, I strongly recommend you check out both of these shows today, if you happen to read this before 2:30 pm when the curtain will rise. Check back later for a review of the final two plays of the TCR Underground Festival - The Summerland Project and The End of an Affair.
at 11:34 AM

Missing the byline on the review.